The birth place of SAKE

In 1996, young volunteers from breweries in Nara Prefecture got together and established a research group called the “Naraken Bodaimoto ni yoru Seishu Seizou Kenkyukai” (which translates as “Bodaimoto-focused Refined Sake Production Research Group of Nara Prefecture”) or Bodai-ken, for short. After researching into how to make Bodaimoto and various materials and documents, with cooperation from Bodaisen Shoryaku-ji Temple and the Nara Prefectural Institute of Industrial Technology (now the Nara Prefectural Institute of Industrial Development), they initiated the revival of Bodaimoto sake brewing at Bodaisen Shoryaku-ji Temple. 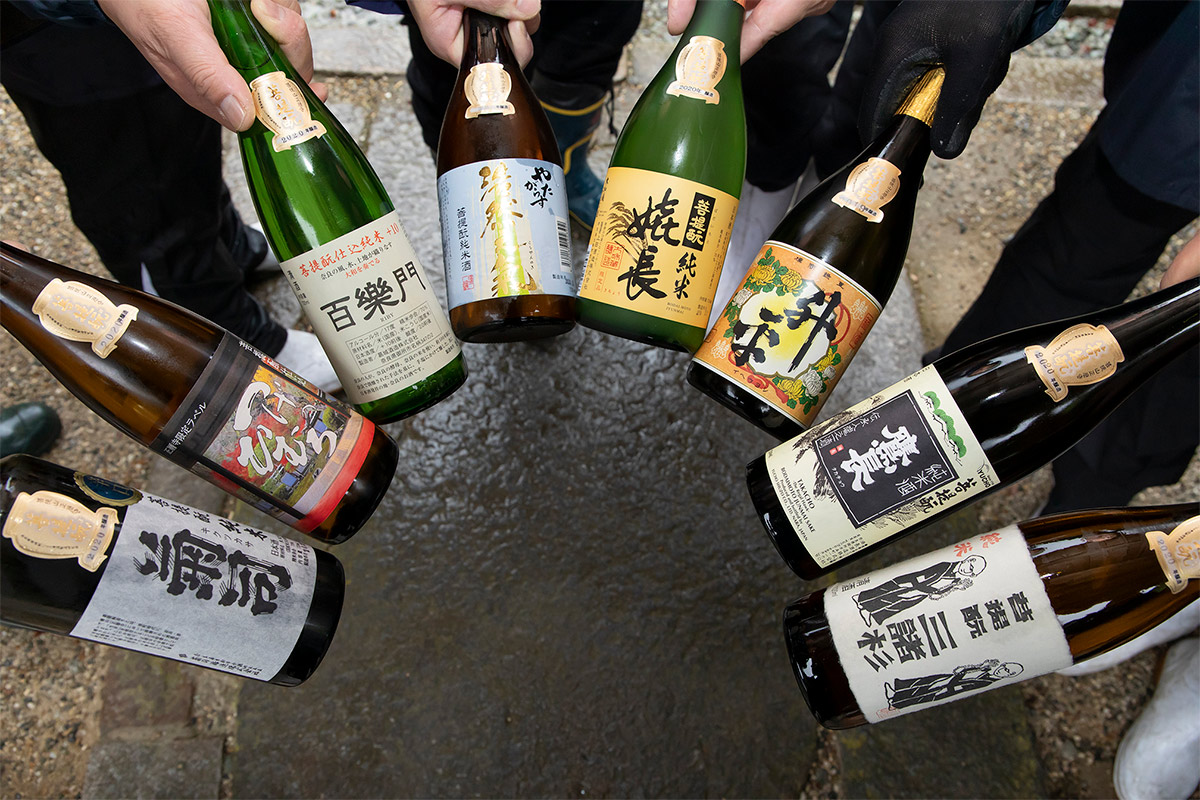 On 11 December 1998, Shoryaku-ji Temple was finally granted a shubo brewing license and temple brewing was revived. For over 20 years to this day, members get together every year and prepare Bodaimoto in a cooperative effort. Each year, the Bodaimoto shubo, prepared in cooperation with the temple, is divided among the members who take it back to their respective breweries. Each brewery then makes its own junmai-shu sake from the shubo. With their unique skills and techniques, each brewery gives rise to their own rendition of Bodaimoto junmai brimming with individual character and taste. Every year the Bodai-ken research group organizes a workshop at which attendees engage in tasting, make shipping decisions, and efforts are made to improve the brewing techniques of the members. Through brewing Bodaimoto over the past 20 years, we ourselves have been able to recognize the important role it has played in the history of sake.

Going forward, we would like to widely convey these techniques to the next generation while preserving the practices of temple brewing. With this goal in mind, we established the definition of “Bodaimoto”, as advocated by the Bodai-ken research group.

Bodaimoto is a shubo made at Bodaisen Shoryaku-ji Temple, which is a temple that played a central role in temple brewing in Nara during the Muromachi period. Its mashing process is characterized by the use of soyashimizu (lactic acidic water) in place of regular brewing water which allows for the yeast to be cultivated in an acidic environment from the beginning. The Bodai-ken research group prepare this soyashimizu in keeping with the “Requirements for Soyashimizu”; and Bodaimoto is defined as a shubo that is mashed using such soyashimizu.

Soyashimizu is a lactic acidic water made by soaking raw rice (not yet steamed) in water to induce natural lactic acid fermentation, or by pitching into water the appropriate lactic acid bacteria, and then lacto-fermenting the water (of neutral pH) at a high temperature of 25℃ or above over a short period (2 to 7 days) until its pH falls below 4.0.
While it is recorded in such historical literature as the “Goshu no Nikki”, that boiled rice called “otai” is to be used in lacto-fermenting the soyashimizu, it has been observed that sufficient lactic acid fermentation can be attained with the trace amounts of glucose present in raw rice using the lactic acid bacteria isolated from Shoryaku-ji Temple (Lactococcus lactis lactis). Thus, the process of boiling the rice can be omitted. It is not permitted to add any organic acids other than soyashimizu during the process of shubo cultivation.

Shubo made according to this definition are to be considered orthodox Bodaimoto originating at Bodaisen Shoryaku-ji Temple.

We would like for the Bodai-ken research group to play the role of “kataribe” (storyteller) for the history of sake and Bodaimoto brewing techniques.

About the Bodaimoto Certification Seal

This kame jar-shaped seal issued by the Bodai-ken research group certifies that the Bodaimoto junmai, upon which it is affixed, is brewed at a participating brewery from Bodaimoto shubo prepared at Bodaisen Shoryaku-ji Temple.

The role of the Bodai-ken research group is to convey both the cultural and scientific aspects of Bodaimoto through the modern-day reproduction of Muromachi period temple brewing. This brewing uses the gushing water of the temple grounds as well as lactic acid bacteria and yeast isolated from Shoryaku-ji Temple, and takes place at the temple in cooperation with the temple.

Founding Declaration of the Research Group

“The goal of our research group is to restore and raise the status of Nara Sake. The objective behind sake production based on Bodaimoto is to revitalize the tradition of Nara Sake and raise the quality of sake. When we reflect on the brewing techniques of many hundreds of years ago, as well as the hardships of the brewers, we believe that our responsibilities lie beyond simply gathering up old literature and verifying the history and techniques of sake making but also in applying the wisdom of our predecessors to modern-day sake brewing and, through this, conveying such wisdom and techniques to future generations. We are grateful that we can continue to make a living brewing sake in Nara today; and because it is Nara in which we live, we believe that as members we must fulfill this heavy responsibility. Why? Because Nara is the birthplace of Japanese refined sake.